It has been around 6 weeks since I touched down on the soil of South Korea. My apologies for not informing people of what has happened here sooner (sorry mum), but it has been pretty much all go since I’ve been here! So, this Is me filling you in on some of the things I have done.

As the title of the blog so blatantly points out, I am officially an alien. I am no longer a member of the human species, I have ascended.

Well not really. It’s just that I now have the documentation that allows me to live in South Korea for the year. Not as exciting as you thought? Tough.

I suppose I should start by telling you about my first weekend here.

On my first weekend, I was invited to a mysterious place called a Jjimjilbang. Jjimjilbang, what to say. Lots of nakedness. Being a rather tall, 6ft 3inch to be exact, foreign guy I stand out quite a lot. It’s almost as if I’m some kind of celebrity. Everywhere I go heads turn, it’s great! However, in a Korean bath house the whole standing out thing gets super creepy. The elderly, the adults and young boys all try to get a look at the fresh meat. Yes I am referring to my junk, my meat and two veg, whatever you want to call it. It doesn’t help when you go in to the super cold pool and your manhood has shriveled making you as close to becoming a woman as you ever thought you’d ever be.

I’ve made the jjimjalbang sound bad, I didn’t mean this. Although you walk around for the first 5 minutes feeling incredibly self conscious of your shapes, and size, this soon subsides and you embrace the fact that everywhere you look you see a mans privates and that everyone can see yours. Furthermore, I have never been more relaxed in my entire life. There are so many pools to choose from that you’ll find one that suits your temperature needs. Side note: steer clear of the cold pool, unless you are super manly. I am evidently not. Anyway, I’ve never been more clean than after visiting this holy ground (yes I like it that much). I had a shower the next day, it no longer met my needs in the cleaning department.

I believe I have talked about nakedness and bathing for a bit too long, time to move on.

There are so many views to experience in South Korea, and so much to do!! Suwon, the city in which I live, has so much to see! The views from Hwaseong fortress are spectacular! 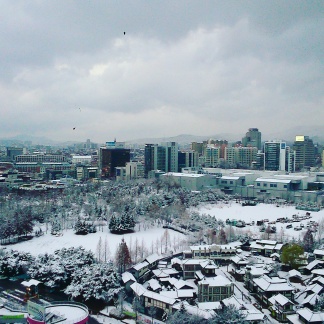 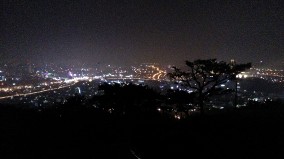 However, being in Suwon means living close to Seoul, which enables me to have the opportunity to go there and look around. It truly is a city that is a cross between the modern and traditional. Words can’t describe this place, so, picture time!

Not exactly the usual look of a city! The Hanok village in Seoul combines traditional Korean homes with one of the largest modern cities in the world. It is astounding.

Within my first two weeks, I also visited Namsan tower which allows you to look over the whole of Seoul. It. Is. Huge. 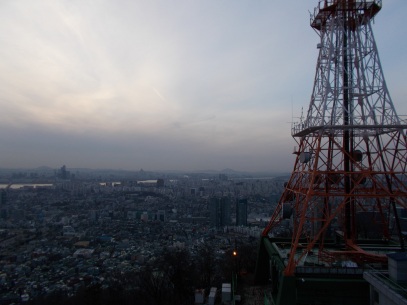 Well, it wasn’t a traditional Christmas in the slightest bit. No mince pies, no Christmas pudding, no turkey, no Boxing Day leftovers. The list could go on, but I’ll keep it to a minimum. Is Christmas really just about food? The answer to that is yes, definitely yes. It’s not to say my Christmas meal was bad, I ate an abnormal amount of sushi, it was just strange not to have a turkey within eating range. Ah well.

Although I didn’t get my Christmas meal, Christmas was still good fun! I went skiing for the first time at Jisan ski resort! 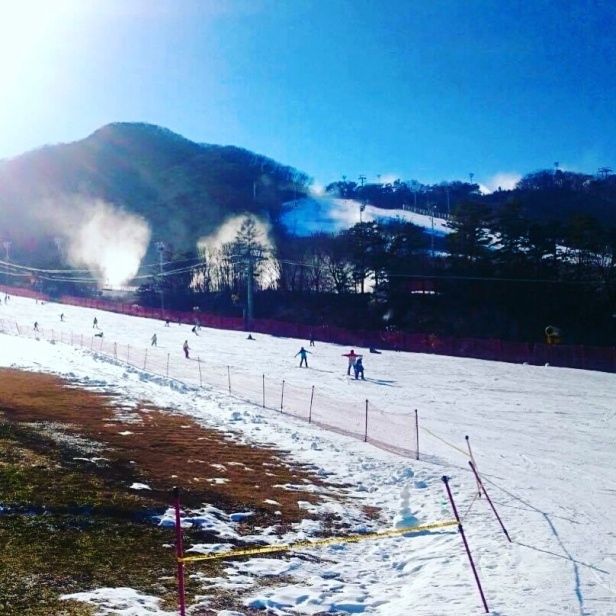 Lets just say, I’m not the most competent at skiing. It involved a lot of falling over. I still haven’t mastered the stopping technique called the ‘pizza’, but I overcame this with a simple trick. Falling on my arse. Whenever I felt the need to stop, I was on my back. It’s safe to say the next day was full of glorious pain after showing the slopes who was boss. Just kidding, I was utterly defeated. Next time, I swear I will master the art of skiing.

Oh, and yes, I am aware that I look like a poor mans Where’s Wally in my ski gear.

Well, it’s been around 6 weeks since I’ve been in South Korea and I haven’t died yet. I must being doing alright then.

I know this is quite short, considering how long it has been since I last updated. All I can say is, my bad. You probably won’t get another update for awhile either as the January intensives start tomorrow. Consequently, I will be struggling to even comprehend what life is for the next three weeks. Just kidding, I’m sure it will be fine. I say this with a lot of optimism.

P.s. teaching is going well, the kids are super fun.